Easy answer to the question asked in the title of this post, right? The last decade is the driest 10-year stretch since record keeping began on the Colorado River. Of course Lake Mead has dropped because of “drought”, right? 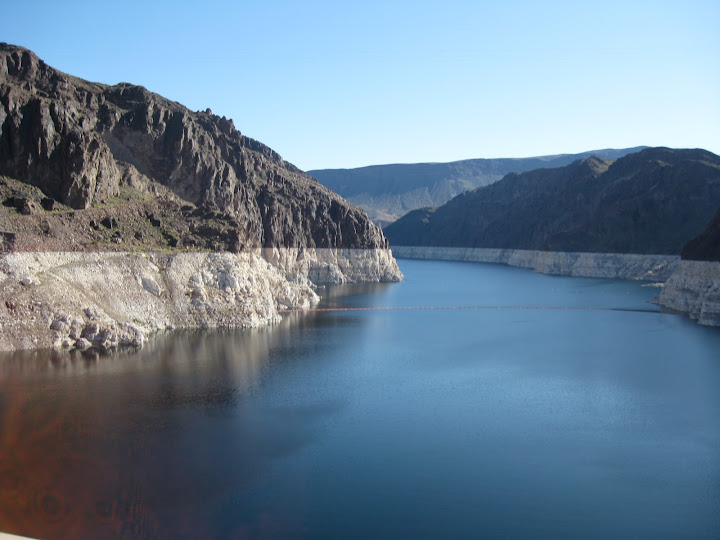 During that entire time, thanks to upstream storage and the fact that Upper Basin consumption is still relatively low, Lake Mead continued to get its entire allotment of water every year as required under the Colorado River Compact. Each and every year, 8.23 million acre feet was released from Lake Powell downstream through the Grand Canyon to Lake Mead. That’s the Upper Basin’s Compact-mandated delivery of 7.5 million acre feet, plus the Upper Basin’s share of the U.S. obligation to Mexico under the Treaty of 1944 (pdf). In fact in one of those years, 2008, Mead got extra.

Here’s a bit of arithmetic, courtesy Paul Miller, a Bureau of Reclamation hydrologist who spoke at the Lake Mead symposium I attended last month in Las Vegas: When you count inflow downstream from Lake Powell, Lake Mead gets 9 million acre feet of water a year. It dispatches 9.6 maf of water a year to cities and farms downstream. Another 0.6 maf evaporates from the desert lake’s sun-cooked surface.

In other words, under normal operating conditions, Lake Mead is overdrawn by 1.2 maf per year.

Like Blanche DuBois, the Lower Basin has very much depended on the kindness of strangers – in this case, folks in the Upper Basin who have not yet used their full share of the river under the Colorado Compact and have for years been sending the extra down the Colorado River.

This is the explanation that arose when the University of Colorado’s Doug Kenney and his colleagues compared the drought of the ’00s with the hypothetical drought used in the famous Severe Sustained Drought case study published in 1995.

In the SSD study drought, Powell declines first, and Mead’s levels hold steady. But when Kenney and his colleagues (Rethinking Vulnerability on the Colorado River, Journal of Contemporary Water Research and Education, Issue No. 144, March 2010, pdf here) compared the SSD drought to the real one we’re now experiencing, they found both reservoirs dropping. Why did the SSD get it so wrong? Because of the completion of the Central Arizona Project (CAP), which finally allowed Arizona to consume its full legal Colorado River allotment:

The result, as Emily Green noted today, is that Mead’s surface elevation is back under 1,100 feet as of the end of April.

I don’t think you can point a finger of blame here at anyone in particular. In fact, as a journalist, that’s the most interesting thing about this issue to me. No one person or entity is in charge of the Colorado. Instead, you have this fascinating collective management going on, involving complex and subtle interactions among the Bureau of Reclamation, the seven states, and the water agencies, all constrained by the somewhat rigid but nevertheless evolving “Law of the River”. It’s precisely the sort of collective management of a common-pool resource that Elinor Ostrom

It’s also not helpful, I think, to go all Cadillac Desert

and blame Floyd Dominy and the engineering culture of the 20th century. We’ve got the dams, canals, farms and cities that we’ve got.

In answer to the question posed by this post’s title, I guess one could argue that a climatological drought is at least partly to blame. If it had been wetter over the last decade, there would have been extra in the Upper Basin, and some of that bonus water would have sloshed on down through the system to Lake Mead.

But depending on surpluses does not sound like a sound long term management strategy.