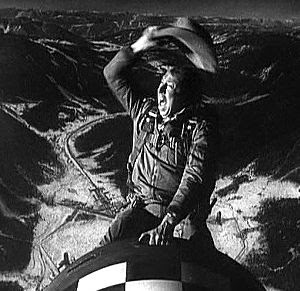 If you follow nuclear weapons policy, the last thing you need at this point is another analysis of yesterday’s Nuclear Posture Review rollout. But I did have something to say in this morning’s newspaper (sub/ad req) that represents what I think is an important and underappreciated piece of the debate.

Here in New Mexico, home to two nuclear weapons design labs, we see the system from the bottom up. And as I wrote this morning, the bottom-up perspective get’s a unique airing in the document:

The new review includes an unprecedented emphasis on the work done by the labs and nuclear weapons manufacturing plants, according to sources familiar with past Nuclear Posture Reviews, which were largely classified….

Arsenal reductions place greater emphasis on the maintenance of the weapons that remain, officials said. The problem, according to the review, is that the complex of labs and plants needed to do the work “has fallen into neglect.”

The document calls for:

• A multibillion-dollar replacement for the Chemistry and Metallurgy Research building, a six-decades-old plutonium research complex at Los Alamos National Laboratory. Plutonium is one of the two main radioactive materials at the heart of nuclear weapons.

• A similar multibillion dollar uranium complex at the Y-12 weapons plant in Tennessee. Uranium is the other main radioactive material used in nuclear weapons.

A by deeply embedded historical tradition, there is a military-civilian split between the civilians who design and build the nukes (a job now done by the U.S. Department of Energy’s National Nuclear Security Administration) and the warfighters who would drop the resulting devices on commies (the Department of Defense). There were good reasons for the split, but an unfortunate side effect has been a diffusion of responsibility for the complex of labs and plants responsible for nuclear weapon design and maintenance.

Past Nuclear Posture Reviews, and past nuclear weapon policy more broadly, as been focused on the warfighters and the diplomats, with the infrastructure needed to supply the tools of Armageddon a bit of an afterthought. “Oh, yeah, y’all please take care of these warheads for us, will ya?” The infrastructure presents thorny problems of its own, especially maintenance of the very expensive buildings needed to work with icky materials like uranium and plutonium. Without central attention from the senior national security leadership, that infrastructure has been allowed to atrophy to an embarrassing extent.

Yesterday’s NPR appears to restore the centrality of that boring but essential infrastructure. We’ll see how well actions over the next few years support the document’s assertions.