LAS VEGAS, NEV – The distance between Morelos Dam on the lower Colorado and the Bellagio Fountain is profound. Morelos spans the U.S.-Mexico border, with the wheat fields and onions of the Yuma County Water Users Association behind me as I took this picture and Algodones on the far bank. Most years, Morelos is where the Colorado River effectively finishes its now futile run to the sea.

You can see a Border Patrol truck in the foreground. They were very attentive to my presence as I drove the levee this morning between Yuma and San Luis, on the U.S. side of the border.

After some more stops to see the Lower Colorado’s plumbing (more pictures later), I made a beeline for Las Vegas. The contrast could not have been more stunning – up through the Sonoran and Mojave deserts, all mesquite and creosote, with occasional glimpses of the river strip in the distance, then through a ridge in the mountains, from quiet desert to this: 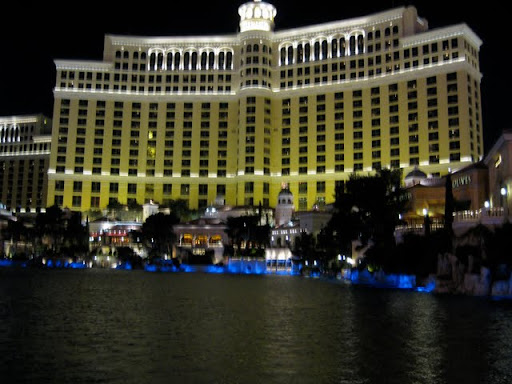 Apologies for the slightly blurry image, but I just have a little point-and-shoot. It was windy and they called off the show, so it’s really more the Bellagio pond. I’ll try to get back tomorrow. But I just had to go see it.