By John Fleck and Eric Kuhn 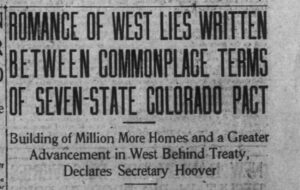 As the Colorado River Compact’s negotiators trekked home in the final week of November 1922 following the completion of their task, the rhetoric soared.

Newspapers across the basin published the text of the Compact in full, and the leaders of the negotiation effort fanned out to praise the effort and lay the groundwork for the next steps.

Herbert Hoover, the Commerce Secretary, Commission chairman, and the diplomat who had steered the negotiations through the narrow space for compromise available, spared little in his enthusiasm, nor in his optimism of the next steps. From a Los Angeles radio address:

The foundation has been laid for a great American conquest. The harnessing of the giant Colorado river will follow the ratification of the pact by the seven states of the Colorado river basin. With such ratification, the next step will be the construction, without delay, of a control dam, under authorization of congress.

Then the southwest will come into its magnificent heritage of power and life giving water, and all the nation will be vastly benefitted.

Arthur Powell Davis, head of the Reclamation Service and technical leader of the Compact efforts, framed the agreement as an end to conflict over the river’s water:

It will obviate the delay and acrimonious litigations which a year ago seemed imminent and has cleared the way for the provision of flood control and irrigation storage urgently needed and indispensable to further development in the Colorado river basin.

There would be “millions of homes” (Hoover’s words), a vast expansion of irrigation, and flood protection for the Imperial and (Hoover was at pains to point out to the Arizonans) Yuma valleys.

The sales pitch – plenty of water for all

The natural flow of the Colorado river averages nearly 20,000,000 acre feet per annum.

The Upper Basin’s 7.5 million acre foot allocation was “more than double its present needs,” enough to bring another 3 million acres under irrigation, “sufficient for all feasible projects, and some of doubtful feasibility.”

Similarly, with the creation of storage, the Lower Basin would be able to greatly expand its irrigated acreage.

And will all that, Davis argued, the deal left a 4 million acre foot “surplus”, enough to meet the needs of a future treaty with Mexico and to return in the future to reallocate the rest.

“Confidence that all the state legislatures will approve the compact was expressed by various commissioners,” the wire services reported out of Santa Fe.

As if ratification might be treated as a formality, attention turned immediately to Congress, where officials eyed the pending Smith-McNary bill as a vehicle to launch the Colorado River projects.

Both would take far more time – six years for Congressional action, more than two decades for state ratification, with the start of construction sandwiched in between.

But the changes to the West to be wrought by the Compact’s fewer than 2,000 words were now underway.