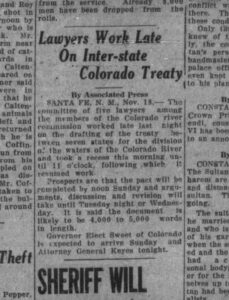 After a two-day break to allow the drafters to do their work, the Colorado River Compact negotiators came back together a century ago, on Nov. 19, 1922, to wrestle with three unresolved questions:

When they returned for their Sunday morning meeting, it is apparent from the surviving Compact Commission minutes that on Saturday they either met in executive session or Hoover had met with the individual basin caucuses. Three days previously, the commissioners had agreed to 75 million acre-feet every ten years delivery at Lee’s Ferry, the provision that would make up the Compact’s Article III (d). The issue now facing the commission was how much consumptive use would be apportioned to each basin in this round and did these apportionments include uses on Arizona’s tributaries.

The water of the Colorado River System may be appropriated throughout the Colorado River Basin without restriction until appropriations in either the Upper Basin or the Lower Basin shall reach 7,500,000 acre-feet per annum, including present initiated rights. In that event a notice providing for a new apportionment may be issued under Article IV. If at the time of said notice the aggregate of such appropriations in either Basin shall exceed those in the other there is hereby vested in that Basin having the lesser amount a continuing and preferential right to make further appropriations until the total in each of the Basins shall be equal.  The unappropriated surplus of waters then remaining above 15,000,000 acre-feet shall be equitably apportioned under Article IV.

Hoover added that Arizona legal advisor Richard Sloan wanted additional language providing in the event the states could not agree on a new apportionment of the surplus waters, either basin could go to court to seek a judicial equitable apportionment.

Hoover then turned to Arizona’s Winfield Norviel and asked, “What do you think?”

Norviel responded, “Well, the thing don’t mean much to me. I don’t understand it at all.”

Norviel wanted more details on the 7,500,000 acre-feet and in particular “if this 7,500,000 acre-feet is to include the streams below Lee’s Ferry and things of that kind. Yesterday, we arrived at the point of excluding these. Mr. Carpenter made that statement that they were ours utterly to use as we saw fit.”

Carpenter interrupted: “No I didn’t, not for a minute.” New Mexico’s Steven Davis stepped in to support Carpenter, noting that even if Carpenter had agreed, “the Northern Sates had not.”

After restoring order, Hoover walked Norviel through his understanding of what they had agreed to, explaining that the proposed definition of the Colorado River System includes the “whole drainage basin of the Colorado River in the United States”, so yes Hoover emphasized, “the Gila and all other lower rivers are included” in the 7,500,000 acre-feet.

It’s easy to see why Norviel might have been confused. The Upper Basin’s offer to guarantee 65 million acre-feet every ten years at Lee Ferry did assume that the Lower Basin would have full use of its tributaries, as did Hoover’s suggestion of 82 million. What Norviel failed to recognize was that those offers were made when the commission was trying to divide the entire river two ways. Under the three-way split – Upper Basin water, Lower Basin water, and a surplus to be dealt with later – the key was limiting each Basin to a specific level of appropriations (7.5 million acre-feet of consumptive use). If Davis was wrong, then a new commission would deal with it in the future from the surplus “unapportioned” pool.

It’s also easy to see why Norviel was nervous. He now worked for a lame duck governor, Thomas Campbell. His successor, George W. P. Hunt had defeated Campbell by running against Arizona’s approval of a compact. Norviel knew that if Arizona was ever going to ratify a compact, he had to negotiate a compact with iron-clad protections for existing uses on the Gila River.

After a bit of further discussion, the Commission decided that they were at an impasse with Norviel on Article III (a) so, they decided to move onto other matters.  They spent much of the rest of the morning discussing the dispute resolution provision, now Article VI. At the end of the morning meeting, they begin to address one of their most delicate issues, water for Mexico.

Hoover opened the 20th meeting at 3:45 PM that Sunday. They began where they left off before lunch, discussing how to address water to Mexico under a future treaty. There had always been the framework of a consensus on how to address Mexico. In his compact proposal, Carpenter had suggested that each basin equally share a future Mexican burden.  Now that they had tentatively decided to set aside a surplus pool, the Commission agreed that any water for Mexico should first come from that pool but in the event the surplus was insufficient then each basin would equally share the deficiency. There was confusion among some of the Upper Basin commissioners over whether the Upper Basin’s 75 million acre-feet every ten years included water for Mexico.  With Carpenter’s help, Hoover cleared that up emphasizing that the Upper Basin’s 50% share of any deficiency would be additive to the 75 million acre-feet.

What Hoover wanted the Commission to avoid was putting something in writing in the compact that would give Mexico a future negotiating advantage when the two countries sat down to negotiate a treaty. He even suggested deleting any mention of their discussion of Mexico from the minutes – which did not happen.

After addressing Mexico, the commissioners turned their attention to addressing the priority of different uses.  Again, there was general agreement on how to proceed. Irrigation and domestic uses would be superior to power generation, and all would be superior to navigation, but getting the language right was not easy. Further, Hoover’s legal advisor Ottomar Hamele expressed concerns that Congress would not agree with them on navigation. They would come back to that issue (and Hamele was right).

Late in the 20th meeting Hoover raised the question the Colorado River Basin is struggling to come to grips with even today – the rights of the basin’s Native American communities. The U.S. Supreme Court had ruled 14 years earlier, in the case of Winters V. United States, that Tribes were legally entitled to significant amounts of water. And there were a significant number of Tribal communities in the Colorado Basin. But Hoover’s approach to the issue demonstrates the gap between the legal intentions of Winters and the political and cultural reality of the treatment of tribes.

In offering a proposed compact provision, Hoover referred to it as the “wild Indian Article”, demeaning language echoing a tone of superiority that was prevalent a century ago and would continue to characterize how the European settler-based water management community would address the water needs of the basin’s tribes for much of the century that followed. His language was simple: “Nothing in this compact shall be construed as effecting the rights of Indian Tribes.”  James Scrugham immediately asked. “Why include any provision in the compact?” Hoover responded “to protect the U.S. who have treaties with the Indians” adding “these treaty rights would probably exceed these rights anyway. We don’t want the question raised.” The vote on Hoover’s proposed Article failed when Wyoming’s Emerson says he wanted “to withhold his decision.”

The Commission then adjourned until 10 AM the next morning.  They had accomplished much during the two Sunday sessions, but the commissioners were not happy. They needed to find a way to address Norviel’s concerns with the apportionment Article, the primary purpose of the compact.