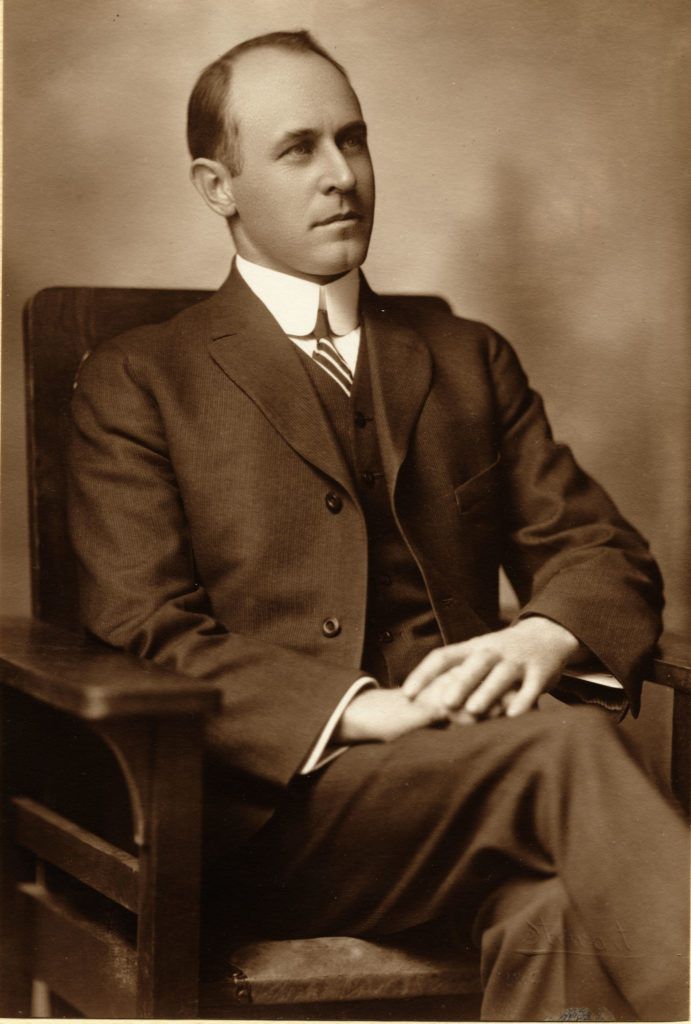 As the Colorado River Compact Commission negotiators returned to their discussions for a short 8 p.m. Sunday evening meeting Nov. 12, 1922, they began trying to dive into the details of how to divide up the great river.

In trying to make the broad concept of dividing the river between a newly proposed “Upper Basin” and “Lower Basin”, they found devils in the details:

After Saturday’s long meeting where they heard various proposals for a compact, Sunday’s gathering was short.  The focus immediately turned to the Delph Carpenter’s two-basin proposal and most of the questions came from Arizona’s Winfield Norviel. Norviel first asked the basis for Carpenter’s proposed 50/50 split based on the river’s flow at Yuma. Carpenter, while acknowledging that it was somewhat arbitrary, said he chose Yuma to make sure the tributaries below Lee’s Ferry were included in the division and that that an equal division of the use of the river was an “equitable” division. He noted that he used the Yuma gage flows to determine how much water the upper river would have to deliver at Lee’s Ferry to achieve a 50/50 division.

How much water must pass from “upper” to “lower”?

Norviel then turned his attention to Carpenter’s proposed 62.64 million acre-feet every ten years delivery at Lee’s Ferry. He voiced concerns that the ten-year provision would not provide the lower river enough certainty – noting that the upper division would have complete control over how much water was delivered in any one year. Carpenter responded that if Norviel was concerned that they could deliver no water for seven straight years then delivering it all in three straight years, such a delivery was ‘not in the range of my thought.” Carpenter went on to note that a reservoir at (or just above) Lee’s Ferry would naturally be a “stabilizing influence for the lower territory,” but such a reservoir “would essentially be a lower division reservoir.”  At this point Nevada’s James Scrugham suggested “wouldn’t the possible objection be solved by including with the amount, a minimum flow in second feet?” Carpenter responded that he would have no objection “if you made it low enough.”

A future obligation to Mexico?

Concerning the proposal that each division deliver an equal 50% share of any future treaty delivery to Mexico, Norviel asks “is any estimate to be made of the loss by evaporation or percolation between Lee’s Ferry and the point of diversion to Mexico?”  Carpenter responded no – “it was thought that the power benefits and other benefits that would run to the lower country would offset the loss.”

The discussion of losses prompted Herbert Hoover, the Commerce Secretary and Commission chairman, to ask Carpenter if his plan “conceives a sort of fifty-fifty division of the river as it was before white man began to divert it?”  Carpenter, perhaps confused by the question, responded “it would probably result in that conclusion.”

Sorting out the numbers

Reclamation’s Arthur Powell Davis then took the opportunity to provide the commissioners with his Reclamation Service’s data on existing irrigation above Lee’s Ferry and in the Gila River drainage. According to Davis, about 1.53 million acres were being irrigated in the upper river and over 400,000 acres in the Gila, including the Salt River Project. Davis went on to conclude that at an average of 1.54 acre-feet of consumptive use, the total use above Lee’s Ferry was about 2.35 million acre-feet annually. He had no similar total for the Gila but noted that the average consumptive use per acre on the Gila was much higher than in the upper river.

Davis went on to point out that Carpenter’s estimate of 14% for the lower tributaries was too high because it included rivers that Davis thought would be in Carpenter’s upper division such as the Escalante, the Dirty Devil, and the Paria Rivers. He suggested Carpenter use 11%. Perhaps Davis was hoping that Carpenter would adjust then adjust his proposed ten-year delivery (the adjusted number would have been 67.86 million), but Carpenter remained silent.

At the end of the meeting, Hoover asked for a vote on the concept of apportioning water between two basins. Six of the seven, all but Norviel, agreed to proceed with that approach.  Norviel said that he wanted to take more time to think about it. They adjourned until tomorrow morning at 10 AM.