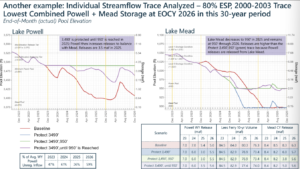 The Bureau of Reclamation folks haven’t posted the slides yet from last week’s Supplemental Environmental Impact Statement briefings. In the meantime, some of us in the Colorado River nerd world have been passing around our screenshotted copies like some sort of precious mimeographed ’60s ‘zine.

It was a remarkable affair.

Buried in the tables and graphs was a sobering message: If we are to take climate change seriously, we need to be prepared for the possibility of:

To be clear, Reclamation is not projecting those numbers. Rather, this is the no-holds-barred reality check being offered by Reclamation’s technical team of a plausible scenario for which we need to be prepared.

Given the context in which these numbers are being offered – new operating rules under a revised version of the 2007 Interim Guidelines – it seems clear where this is headed.

First and foremost, if we have a wet year this year, we need to hold water back now. I can imagine, for example, a new rule that constrains releases from Glen Canyon Dam indexed to inflows – perhaps “don’t release any more water from Glen this year than last year’s unregulated inflow”. If my hypothetical rule takes evaporation into account, that would mean something around a 6maf Powell release in 2023.

One of the flaws we can now clearly see in the ’07 guidelines is that they were keyed to reservoir elevations rather than the actual flow of the river, in a way that allowed us to drain Mead and Powell. We have a chance for a tweak to save us from the worst of that over the next few years.

Cutting Powell’s releases, as we must do, quickly crashes Lake Mead, pushing it well down into the ’07 guidelines shortage tiers. But the model runs presented by reclamation show those current shortage tiers won’t be enough.

So a new set of rules, to get us through the next few years, has to offer up much deeper Lower Basin cuts than the current rules in the ’07 guidelines and Drought Contingency Plan. It also seems clear, after staring at Reclamation’s slides from last week’s briefing, that we need the cuts to kick in sooner, at higher Mead levels, if we are to be prepared for the possibilities contemplated in the briefing. I’m intrigued by a “double DCP” notion that’s been kicking around the basin community, because it’s based on ratios for shortages among the Lower Basin states that have already been negotiated.

My back-of-the-envelope look at those numbers suggests to me that Double DCP at higher Mead elevations might be going a little harsh on Arizona and easy on California. Dunno. Thinking about equities, “present perfected rights”, Tribal water, environmental flows, and my friends in the Lower Basin gives me a headache.

But I’ve got plenty of aspirin and 16 days until Interior’s deadline for comments, so perhaps I’ll make it.