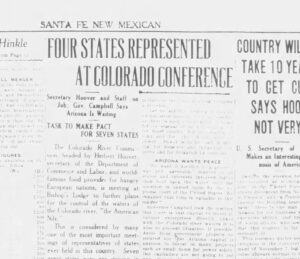 Santa Fe, New Mexico, was off the beaten path in November 1922. That was the point.

After a logjam and a seven-month break, the Colorado River Commission finally reconvened in Santa Fe, New Mexico at the Bishops Lodge on Nov. 9, 1922, to try to find common ground for a seven-state compact to divide the waters of the Colorado River.

The Commission’s chairman, Commerce Secretary Herbert Hoover, chose to meet there because he wanted a secluded location where the commissioners and their advisors could roll up their sleeves and hammer out a compact.

The enthusiasm for a deal, and the optimism for what might follow, was palpable as leaders across the West descended on New Mexico. The obstacles were great, both technical and institutional, New Mexico’s Alamogordo Daily News reported in the days leading up to the gathering.

That all of the obstacles will be surmounted goes without saying, and doubtless in an incredible short time and during the lives of the most of the people now living a net work  (sic) of lines and irrigation ditches will run out from the Colorado river that will give rise to new industries and create thousands of acres of new areas that will support large populations.

The lodge is a few miles north of the city over what was then a very rough road. Time was short. The 1921 law authorizing the negotiations only gave the Compact Commission a year to finish its task. Only 53 days remained and as far as Hoover could tell, the commission was nowhere near an agreement.

The 10th meeting did not get off to a smooth start. First, the commissioners from California, Nevada, and Wyoming had travel problems. All seven state commissioners would not get to Santa Fe until late on Friday. Next, Hoover had a second goal in picking the smallish Bishops Lodge. He wanted to limit the size and attendance at the meeting.  In his view, the negotiations had too many camp followers, especially from California. Hearing that the lodge had booked as many as four to a room, he ordered Clarence Stetson, his aid and commission secretary, to direct the manager to reduce the guest list, limiting those staying at the lodge to two to a room. Although it upset those that were kicked out of the lodge, only a few departed Santa Fe. Instead, most decided to make the daily trek over the rough road and to Hoover’s annoyance, the state commissioners, especially California’s McClure, were reluctant to tell their state colleagues they were not welcome.

Hoover’s scheme to sequester the negotiations kept the press at bay. “The Associated Press dispatches from the conference have been meagre,” the Nevada State Journal reported as the proceedings rolled forward.

While the commission may not have met in seven months, they had kept in communications with each other and Stetson. Colorado’s Delph Carpenter, in many ways the Compact’s most important parent, had been especially active. He was still reeling from his state’s Supreme Court loss in the Laramie River case where the court decision applied the Doctrine of Prior Appropriation on an interstate basin. That loss in his view left the upper river states fully exposed to the big projects California already had in place or was actively planning. He and Utah’s Caldwell both had already decided they would give up on their insistence that Lower Basin projects never interfere with future water use on the upper river. Both had a new idea to share with their fellow commissioners based on dividing the use of the river’s waters between two basins and leave the dividing the water among the states to each basin.

Now they just needed to wait until everyone arrived.