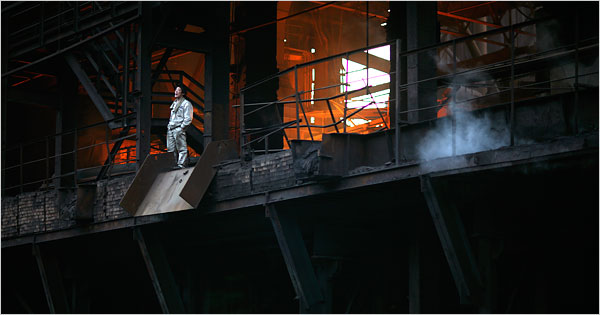 Joseph Kahn, Mark Landler and others had the latest yesterday in the New York Times series on the problems enveloping China’s rapid growth.

The story uses the journalistic trope of moving from the illustrative particular to the more significant general issue underlying it.

The particular in this case is the shift of steel production from Germany’s Ruhr Valley to Handan, in China. The general is the global problem associated with the shift of dirty industrial production (both in terms of greenhouse gas emissions and the more mundane and traditional pollutants that get your laundry dirty when it hangs on the line) from the developed to the developing world. The payoff comes deep in the story, and illustrates the central trick in coming up with a post-Kyoto emissions reduction regime:

One apparent benefit of China’s industrial rise is that developed countries have slowed or cut their carbon emissions, a political and environmental boon as pressure to combat climate change has increased. Even the United States, which has declined to set limits on carbon emissions, has recently shown slight declines. But the gains are illusory.

A study by researchers at Carnegie Mellon University found that if all the goods that the United States imported between 1997 and 2004 had been produced domestically, America’s carbon emissions would have been 30 percent higher.

A separate study for the European Parliament examined the transfer of steel production to China from Germany. It found that China’s less efficient steel mills, and its greater reliance on coal, meant that it emitted three times as much carbon dioxide per ton of steel as German steel producers.

From Beijing’s perspective, its exports of steel and other “carbon-intensive” products provide one more reason — along with its still moderate per capita emissions and its low standard of living — for rejecting mandatory caps on carbon emissions. Rich countries, it says, should cut their own emissions sharply and transfer technology so that China will not pollute as much as those countries did when they had their industrial booms.

Some leading environmental economists agree. “The footprint of the rich countries is very large because they lay claim to resources in other countries,” said R. Andreas Kraemer, director of the Ecologic Institute for International and European Environmental Policy in Berlin.

He and other experts say wealthy countries may have to reduce their consumption as well as their production of carbon in the future. That would oblige them to count what they import from China and elsewhere.

But that idea is notional, while heavy industry’s shift to China is inexorable. (emphasis added)